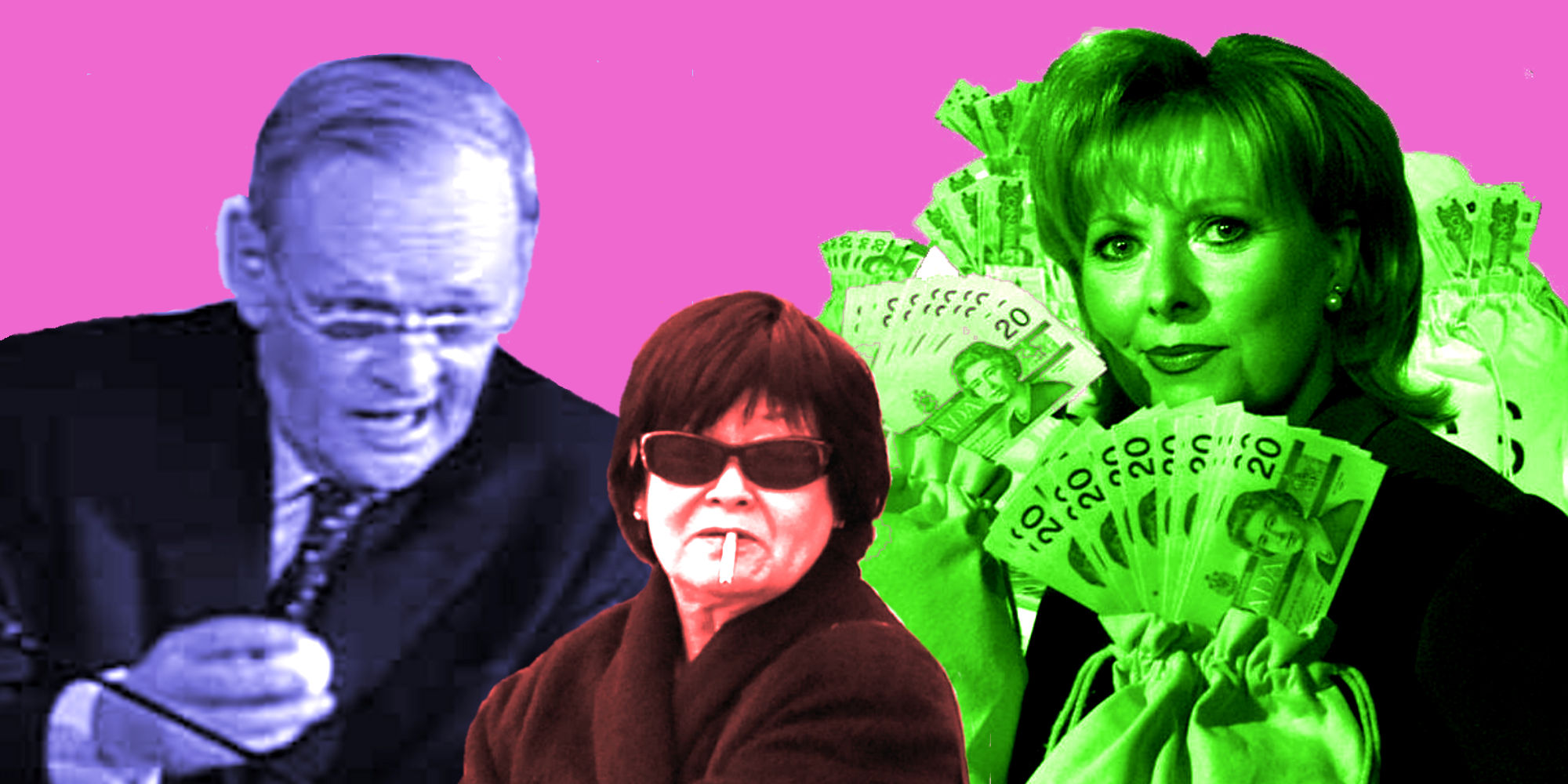 Some scandals that absolutely did not involve sex. From left to right, Jean Chretien testifying at the Gomery Inquiry, Bev Oda at the height of her expenses scandal and Pamela Wallin in an unfortunate press photo taken before her own expense scandal as a Senator (Credit: The Capital photoillustration).

Now compare that to Canada, where a similar list has only two entries: The time in the late 1950s when a Soviet spy slept with half of John Diefenbaker’s cabinet, and the other time when a Depression-era Alberta premier was forced to resign after being charged with seduction for having sex with an 18-year-old legislative staffer.

The Great White North certainly has no shortage of politicians having sex with people they shouldn’t. But new research out of the University of Victoria confirms that, unlike British and American voters, Canadians don’t seem to care.

“There’s a kind of sense that Canadians are prepared to separate questions of morality,” UVic political historian Penny Bryden told The Capital, suggesting that Canadians are likely to see sexual transgressions as being more “private rather than public.”

Bryden is the leading expert on Canadian political scandals, having catalogued more than 1,200 since 1867. In sifting through those 152 years of malfeasance, one pattern has emerged: Canadians can forgive an unfaithful husband or wife, but they cannot abide misspent money.

All the most epic Canadian political scandals involve people who very much kept their clothes on. The 1873 Pacific Scandal brought down the government of Sir John A. Macdonald due to credible allegations that he was trading railroad contracts for bribes. The King-Byng Affair, one of Canada’s most epic constitutional crises, surrounded whether the prime minister or the Governor General reserved ultimate power to dissolve parliament.

Canadian politicians have had their reputations destroyed by sums of money that would seem microscopic by the standards of other G7 countries. Conservative Senator Mike Duffy spent much of 2015 as a leading news item because he had been accused of improperly claiming $90,000 in living expenses, a sum that he subsequently repaid.

Conservative MP Bev Oda was shuffled out of cabinet soon after it emerged that she had racked up a string of questionable expenses including, most famously, a $16 glass of orange juice.

Compare that to Francis Fox, a cabinet minister under Pierre Trudeau who in 1978 admitted that he had arranged an abortion for his mistress, and had even forged the signature of her husband on hospital forms. Fox’s career not only survived, but he later became a senator.

Or John Diefenbaker, who secured two of the biggest electoral blowouts in Canadian history while potentially leaving illegitimate children all across Canada. At least two families bearing a remarkable physical resemblance to the former prime minister have claimed that Diefenbaker is in their family tree.

Even Pierre Trudeau didn’t face a tremendous amount of heat for being nearly 50 years old when he started pursuing an 18-year-old Margaret Sinclair, who would later become the mother of the current prime minister, Justin Trudeau.

On the rare occasion that a sex scandal does spur Canadian outrage, it’s usually because of much more than the carnal act itself. The aforementioned Munsinger Affair, in which a Soviet spy found her way into the beds of several cabinet minister, was a legitimate national security concern.

And when Alberta premier John Brownlee was forced to resign in 1933 because of an affair with a young legislative staffer, the charge that most rankled the public was that he had pressured the woman into sex by threatening to take away her government job.

“It wasn’t the sex that people were worried about, it was the power imbalance,” Bryden said.

These dynamics continue right to the present day. Ontario PC leader Patrick Brown was forced to resign after allegations emerged that he had pressured young women into sex at his home. Brown is a bachelor, so there were no overtones of infidelity. Rather, the outrage all surrounded his alleged sexual misconduct.

Federal MP Tony Clement resigned from the Conservative caucus earlier this year after he admitted to sending sexually explicit photos to an alleged internet mistress who actually turned out to be two African con artists who then tried to blackmail the MP for 50,000 Euros.

Clement is married, but the Conservatives have tolerated adulterers in senior positions before. What changed in that case was that Clement had upped the ante considerably by getting himself caught in an international blackmail ring. As a shadow minister of justice with access to classified intelligence material, Clement was potentially jeopardizing Canada’s national security and reputation.

Bryden organizes Canadian scandals into several categories: Crisis, loyalty, sex, security, and entitlement. She also defines scandals as needing not only an improper act, but an attempted cover-up followed by sustained public outrage.

“It’s not always what you think will upset people,” she said in a UVic statement.

And the outrage part of a scandal is key, because Canadian history is also filled with plenty of instances of politicians behaving unethically and facing absolutely no consequences.

It’s why Bryden isn’t quite ready to deem the ongoing SNC-Lavalin Affair as a full-blown scandal. The case involves a major Canadian company allegedly using prostitutes to bribe a terroristic foreign dictatorship, and then mobilizing an apparently compliant federal government to go beyond the law to get bribery charges expunged. Nevertheless, Bryden noted that the case has curiously failed to register in the public mind.

“You can be outraged about a sixteen dollar glass of orange juice…but what it is that SNC-Lavalin is about is hard to know,” said Bryden.