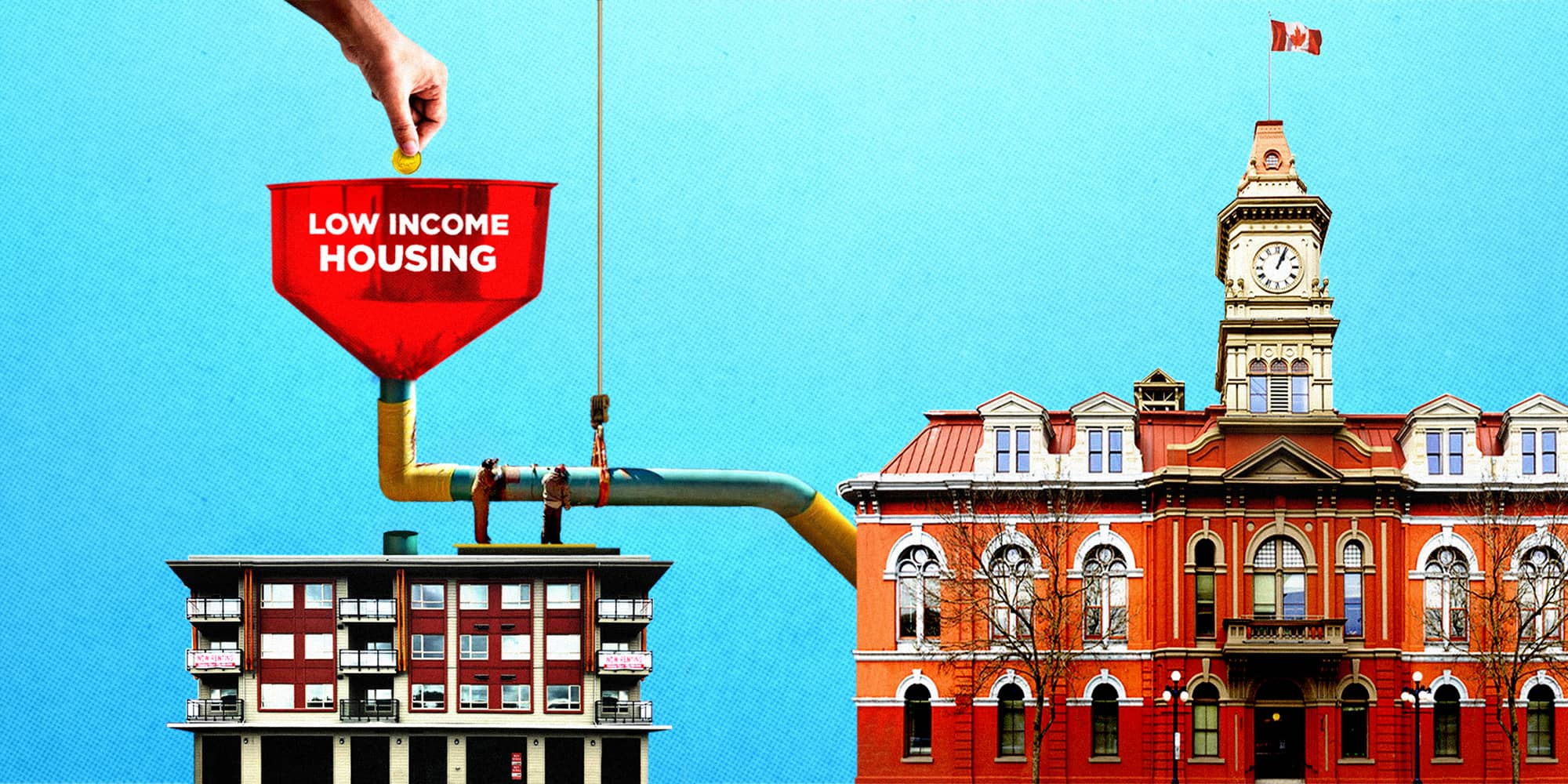 Photo illustration for The Capital by Dash Dixon

A Victoria non-profit that ran a get-out-the-vote campaign in the 2018 municipal election was improperly using resources to support Together Victoria — a municipal slate that elected three councillors — a former board member has alleged.

The allegations by Barrett Blackwood, who was the membership director of the Victoria Tenant Action Group (VTAG) until late last year, led to an internal report which found “it is possible that there was in some cases deliberate co-ordination” between VTAG and Together Victoria — though added the group’s members did not act in “bad faith.”

“To the best of our knowledge, there was no deliberate co-ordination between VTAG and (Together Victoria) during the 2018 election,” VTAG told The Capital in a statement. Together Victoria also categorically denies any coordination took place.

“There was no coordination between Together Victoria and VTAG before, during, or after the 2018 municipal election,” it said, in an e-mailed statement, adding it was “not aware of any VTAG resources used in support of the Together Victoria campaign.”

All of Together Victoria’s candidates — Laurel Collins, Sarah Potts and Sharmarke Dubow — won council seats in the election. According to his LinkedIn profile, Dubow was a member of VTAG’s steering committee from August 2017 to August 2018. Collins resigned her council seat when she was elected to federal parliament in October.

In a statement to The Capital, VTAG acknowledged sections of its internal report that said concerns about partisanship were reasonable and that it needs to improve its conflict of interest policies — and said it is taking steps to address these things — but added that Blackwood’s allegations were made in “bad faith.”

VTAG registered as a third party in the municipal election, spending $5,774 according to filings. Under Elections BC rules, third parties cannot advertise on behalf of a candidate or a campaign organization.

When Blackwood attended the annual general meeting in November, 2019, he was dramatically ejected from the premises by security when he said he tried to raise his concerns in public — but VTAG said this was due to his repeatedly disruptive behaviour at the meeting.

The Victoria Tenant Action Group began as an initiative of the Together Against Poverty Society, with initial funding by the Victoria Foundation when it launched in 2017. It was founded to create a network of tenants in Victoria who could share information about housing issues, provide them with information about their rights, give advice about dealing with landlords, and offer representation at Residential Tenancy Branch disputes. VTAG incorporated as a non-profit society in 2018.

According to the internal report, Blackwood — who served on the organization’s inaugural board — first raised concerns in the summer of 2018. After VTAG launched a voter drive, dubbed the Municipal Election Renters’ Mobilization (MERM), he noticed the hiring committee charged with finding an organizer to run the campaign consisted solely of Together Victoria supporters.

In June 2018, they would hire a former Green Party organizer who previously worked with Potts. That organizer, Blackwood said, would later attend a Victoria Together strategy meeting in August 2018.

The MERM campaign would send out a survey to candidates for city council about housing issues, in particular asking them if they believed housing was a human right.

Hello! VTAG is launching a Municipal Election Renters Mobilization Campaign for the upcoming #municipalelection. We will mobilize #renters and advocate for strong policy positions in order to improve #tenant rights in the #CRD. #HousingForAll #StayTuned #TAGVictoriaBC pic.twitter.com/lwwTPYo5c5

It would go on to produce graphics based on survey responses showing Collins, Dubow and Potts — and the Together Victoria slate as a whole — as being more supportive of "housing as a human right" than several other candidates.

In addition, Blackwood alleged that MERM and Together Victoria members  were canvassing apartment buildings at the same time. An October 2018 email shows one VTAG member, who was also campaigning for Together Victoria, offering to let MERM into an apartment complex alongside their canvassers. “I'm reaching out to you folks to see if you want to join me at View Towers for an election canvas,” they wrote, on October 6. “Benefit of doing this is we will all have written authorizations from the candidates.”

VTAG’s internal investigation acknowledged the email could appear inappropriate, but said “unless there is evidence that MERM canvassers who did enter worked in conjunction with candidate canvassers, or explicitly endorsed the candidates being canvassed for, this assistance does not constitute wrongdoing.”

Overall, investigators found Blackwood’s concerns about the campaign were not without merit.

“We believe it is reasonable to raise concerns over partisanship in the hiring of the MERM co-ordinators and the execution of the MERM campaign given the MERM leadership’s partisan involvement,” reads the report, dated January 26, 2019.

Investigators at VTAG concluded that — while its members had not “deliberately obfuscated personal or political connections that could have been conflicts of interest” — it should adopt more stringent protocols and policies around conflicts-of-interest and nonpartisanship.

“To ensure that we can focus our energy and attention on organizing for housing justice, we are currently working on internal policies with regard to conflict of interest as guidance for relevant future campaigns,” said VTAG, in a statement to The Capital.

Meanwhile, despite the allegations, the organization’s internal investigation said VTAG “met or exceeded the non-partisanship and independence required of us by Elections BC.”

“In the few months and weeks leading up to election time, various election related VTAG activities — that were spearheaded by persons with authority within the organization — became blatantly and obviously organized in conjunction with Together Victoria election related activities to the exclusion of any other candidates,” Blackwood said, in an interview with The Capital.

VTAG’s own internal report acknowledged the organization’s “desire to form a progressive majority voting bloc on city council.” However, it also found that Blackwood’s personal benchmarks were excessive. “We believe that Barrett’s standards for non-partisanship were not agreed to by the group, and if followed, would be detrimental to the policy outcomes VTAG stands for (namely, greater rights for renters),” reads the report. “There is a spectrum of partisanship, where running for office could be at one end, and abstaining from all political activities is at another.”

(Disclosure: One of the report’s authors, Cameron Welch, writes the Capital Daily newsletter. He was not involved in the commissioning, writing or editing of this story.)

Meanwhile, VTAG members would question Blackwood’s own non-partisanship after he made a November, 2019  appearance on Freedom Free for All, a fringe Victoria YouTube show. Hosts on Freedom Free for All routinely rail against Victoria city councillors (sometimes referring to Councillor Ben Isitt as Ben “ISIS”), deny the existence of climate change and promote conspiracy theories about chemtrails and vaccines.

One VTAG member found Blackwood’s appearance online, and shared it with others out of caution. “I think this appearance, while unfortunate, presents a clear call to action when reaching out to our personal networks," they wrote.

VTAG’s internal report acknowledges several additional allegations made by Blackwood, though investigators broadly dismissed most of them, with the caveat that their mandate was limited.

“In general, we believe the majority of Barrett’s concerns regarding outright wrongdoing are either unfounded or unable to be substantiated due to a lack of evidence and/or the scope of this process,” they wrote. “We believe the personal or political connections that Barrett objects to cannot be taken on their own as evidence of improper collusion, because those connections are a naturally occurring part of progressive, activist communities in Greater Victoria.”

Blackwood said that fellow VTAG members “essentially removed” him from the organization during the election and when he received notice that an annual general meeting would take place in November 2019, he decided to show up and try to raise his concerns publicly.

There is no dispute about what happened next. When Blackwood turned up to the AGM, he was thrown out.The reasons for this, however, are heavily disputed.

“As a director of VTAG, I was not given an agenda prior to the meeting and any attempt I made to speak was abruptly cut off by the chair of the meeting,” Blackwood said. “The structure of the meeting was specifically designed to prevent me from displaying documents or information.”

"We believe the personal or political connections that Barrett objects to cannot be taken on their own as evidence of improper collusion, because those connections are a naturally occurring part of progressive, activist communities in Greater Victoria"

He said VTAG members asked staff at the public library where the meeting took place to remove him.

“I was extremely uncomfortable with the seeming comfort of the group in ejecting a board member of the organization, an Indigenous man, who was simply trying to speak and being clearly and forcefully prevented from doing so in the name of ‘efficiency’ and ‘getting through the agenda’,” said attendee Suzanne DeWeese, a member of the Victoria Precarious Tenants Association, in a statement issued after the meeting. “I left because to stay felt as though I was being complicit.”

VTAG, however, said Blackwood was repeatedly disruptive at the meeting, refused to allow others to speak and was warned multiple times that he was in violation of meeting rules.

“He repeatedly interrupted the facilitator and members who had waited their turn to speak, to the point where people were getting up and leaving,” said VTAG, in a statement. “Despite being warned that he was in violation of the room agreement and given the opportunity to change his behaviour, he continued to act in a disrespectful and disruptive manner. He was asked to leave several times, which he refused, before security was called to escort him out.”

Blackwood remains dissatisfied with VTAG’s internal report, given investigators said it was “beyond the scope” of their mandate to determine whether there was any partisan coordination between the organization and any campaigns with certainty, and he believes more should be done.

“I believe the initial concerns regarding possible coordination between VTAG and the Together Victoria political group’s 2018 civic election efforts were grossly underestimated,” he said.

What If the Sludge Pipeline Breaks?

The Rejected Plan to Build a Bypass Around the Malahat