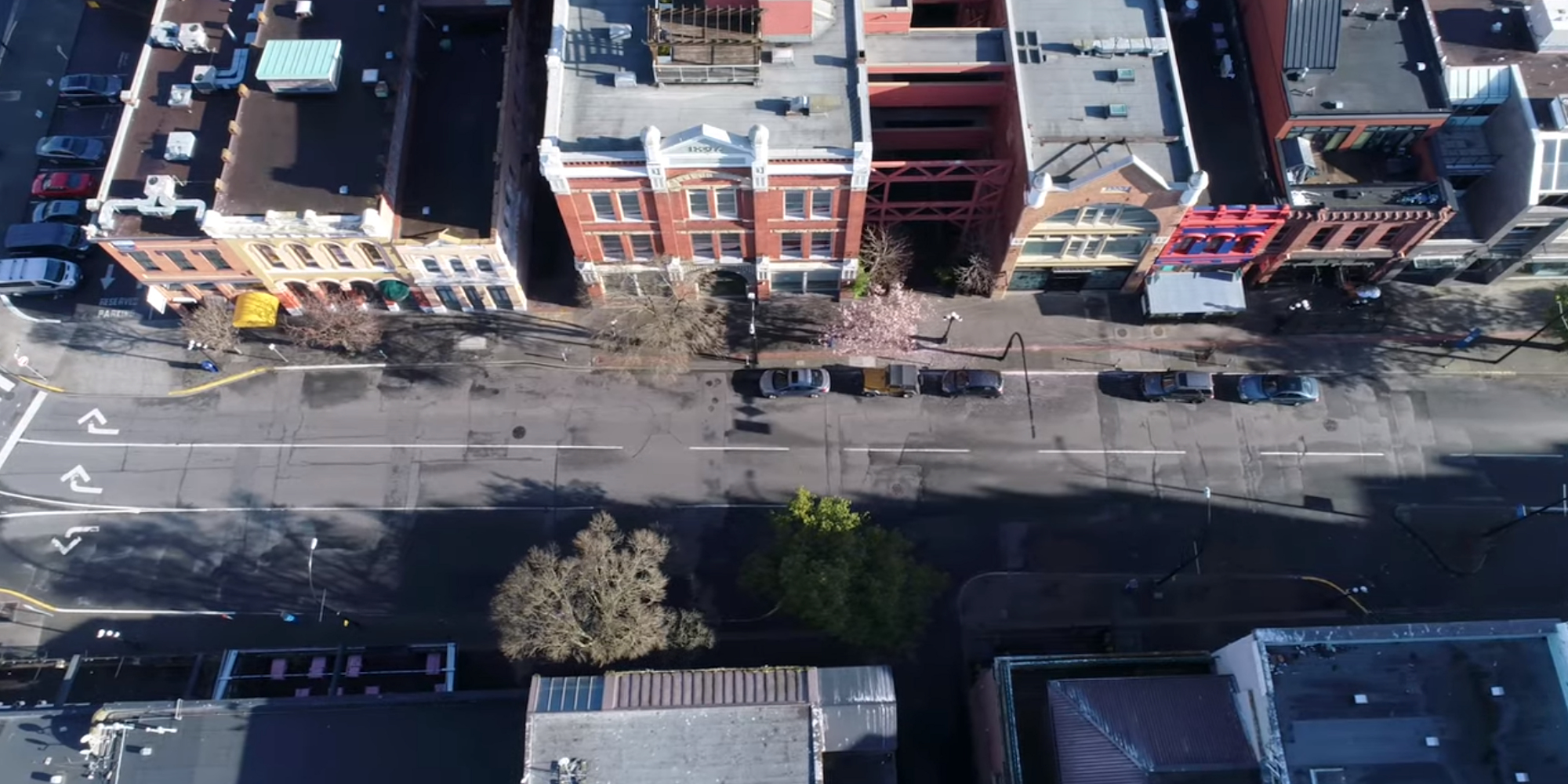 Not a person to be seen in this aerial image of Lower Yates captured on March 29, 2020.

Last week, The Capital captured eerie portraits of a Victoria emptied out by successful social distancing measures. On Sunday morning, the aerial photographers over at Victoria-based SkyScope did us one better: They captured a deserted Victoria from 300 feet up. With the gracious permission of SkyScope, we present their greatest hits below.
‍

A couple cars can be seen in this view of Douglas Street, but otherwise the scene is of empty sidewalks, empty bike lanes and empty rooftops. Downtown bars and restaurants have been closed to diners since March 18th and most of the office buildings seen in this video are operating on skeleton crews as workers shift to telecommuting from home. The Bay Centre, at lower right, is still open, but only for five tenants that have been designated as essential services: Coast Capital Savings, LensCrafters, OptiCanada, Service Canada and the Great Canadian Dollar Store.
‍

Note the empty Inner Harbour moorages. Prince of Whales’ Salish Sea Eclipse has been idled by provincial shutdown, and dozens of slips that would normally be occupied by water taxis and visiting pleasure craft are empty. With the Clipper, the MV Coho and Harbour Air all having suspended operations, it’s possible the Inner Harbour has never been more devoid of marine traffic in at least a century.
‍

Victoria’s famous Empress Hotel suspended operations only days before this footage was shot, instantly putting hundreds out of work. The Hotel Grand Pacific, just to the right of the BC Legislature, similar shut down last week and the Royal BC Museum has been closed since March 17.
‍

Only weeks ago, the front lawns of the BC Legislature were the epicentre of mass protests against the Coastal GasLink pipeline that, on several occasions, became so large that they resulted in legislature workers being barred access to the building. A security fence erected to prevent protesters from occupying the front steps is still visible, but needless to say, it hasn’t been necessary.

Houses of worship were one of the first casualties of social distancing. As places of mass gathering disproportionately attended by the elderly, they posed the threat of becoming viral bombs if services had continued unabated. At the time this footage was taken, St. Andrews Presbyterian Church would normally be gearing up for its Sunday service. Instead, its doors are locked and the parkade next door contains not a single vehicle.
‍

The substantial seagull population of Downtown Victoria usually feeds on the tonnes of discarded food left by the city’s ample tourist crowds. With the sudden disappearance of human-provided food, it’s likely that many of the gulls in this video have been reverting to natural food sources such as shellfish.
‍

Cyclists have the run of the Johnson Street Bridge in this video. Although the city has lost many of its usual crowds of cycle commuters, cycling has emerged as one of the few recreational activities undisturbed by social distancing.
‍

Under normal conditions, this would have been the last weekend before the onset of cruise ship season. In late March, U.S. day trippers usually begin ramping up their visits to the city in order to take advantage of the spring weather, giving restaurants and retailers a practice run for the rush to come. Almost no industry will be able to dodge the pain of COVID-19 shutdowns, but the city’s tourism sector is likely facing a forecast worse even than the aftermath of the September 11th attacks.
‍

As covered previously by The Capital, social distancing measures have yielded incredible results in BC. Public health authorities now believe the province is on track to avoid the carnage of Italy or New York. At current rates of new infection, the healthcare system is even poised to manage the expected tide of COVID-19 patients without becoming overwhelmed. So, while Victoria may look like a city of the dead in these videos, the truth is that these are images of a city in the midst of massively successful experiment to preserve life.

Images From An Empty City

Yes, You Should Be Wearing a Mask. Here’s The Evidence.