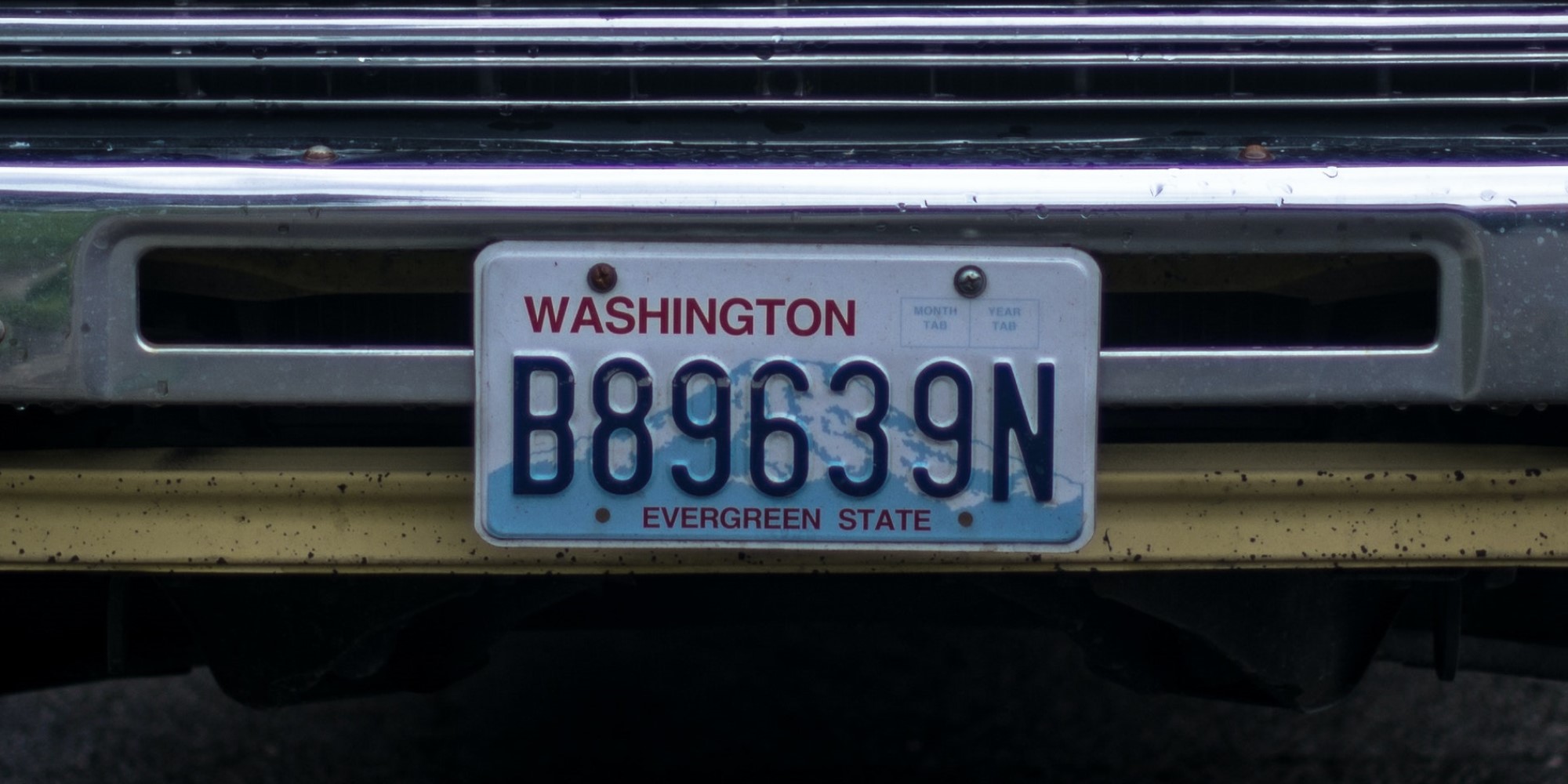 Ride the ferry to the mainland or take a stroll down Douglas Street, and it’s highly likely that you’re going to come across a license plate from Washington State, California or one of the other 49 US states within driving distance of British Columbia. While a normal sight during pre-pandemic times, of late these plates have sparked some ugly behaviour from our normally very welcoming Island: People who have every right to be here and pose no threat of COVID-19 report being the targets of almost daily harassment. It’s not an impossibility that the next car you see with a US license plate is playing chicken with our epidemiological health, but lest you think that our fair island is being invaded by diseased scofflaw border-jumpers, consider the following.

Plenty of Canadians drive vehicles with US plates

COVID-19 has forced many of us to lean on family for extra support, and this has temporarily brought home any numbers of Canadians who, prior to the pandemic, were starting new lives in the United States.

Saanich woman Jennifer Graham typically lives in Arizona with her husband, but returned home (in her Arizona-plated SUV) to help care for her father who struggles with Alzheimer’s. “I’ve parked at Thetis Lake and Beaver Lake, I see people walking by and they are talking and pointing and they don’t look very happy,” Graham told CHEK.

Or, they may simply be a local who, for whatever reason, drives a vehicle with foreign plates. One of the more notable examples of this are U-Haul vehicles. Virtually every U-Haul vehicle carries an Arizona license plate, even if it’s spent its entire working life on Canadian soil.

Even if they aren’t Canadian, they might have been here for months before the arrival of COVID-19

Victoria is a navy town, and wherever there are military installations, there are likely going to be a few Americans. The US and Canadian militaries work very closely together, with the result that each country keeps a substantial amount of officers posted in the other’s country.

A contingent of US Air Force personnel currently posted to Winnipeg, for instance, have reported that their families are routinely told to “go back where [they] came from” by fellow shoppers while on trips to the grocery store.

Victoria is also a university town. International students make up 20% of UVic’s graduate students, and while many have left to ride out the pandemic in their home countries, relationships and jobs have kept many others in their adopted Vancouver Island home.

US license plates may also be sported by someone who has lived here for more than a year, but is still waiting on their permanent residency in order to be able to register their vehicle locally. This describes Vancouver Island resident Kimberly King, whose car still carries California plates more than a year and a half after she moved here to marry a Canadian. “When I first got here, everyone was like, ‘Oh California, how cool.’ Now people tailgate me, flip me off, cut me off. I’ve had to put a little sign on the back of my car that says, ‘Hey, I live here,'” she told CFAX 1070.

Any of these scenarios might also describe US-plated vehicles seen performing recreational tasks such as hauling a boat or a camper. Rather than being a recently arrived US vacationer,, that Washington-plated car may have been riding out the pandemic in BC since Day One.

In a normal year, BC will see upwards of 60,000 new residents settle here from a foreign country, usually the United States. While COVID-19 has slowed international immigrant flows considerably, there remain plenty of newcomers whose planned arrival to Canada has been allowed to continue: They may be joining a Canadian spouse, starting work in an essential field or completing an immigration process that has been years in the making. .

And, just like any Canadian returning home from abroad these new arrivals must undergo a mandatory 14-day period of isolation: Upon arrival they must have an address lined up at which to quarantine and must submit to regular checks by a quarantine officer.

Canadian Lisa Watt returned to Calgary from Houston at the onset of the pandemic to care for her elderly mother, and told CBC that on the day she left her 14-day quarantine she immediately began receiving harassment for her Texas license plates.

The Canada Border Services Agency continues to keep an incredibly tight lock on our southern border: Between March and mid-June, more than 6,000 Americans attempting to enter Canada were turned away. Right now, anybody presenting at a border crossing for frivolous reasons such as tourism or shopping are rejected, as is anybody showing a fever. “Foreign nationals arriving from the US without symptoms of COVID-19, will be allowed to enter Canada only for non-discretionary travel,” declares Canada’s official COVID-19 travel restrictions.

One way around this is what's known as the "Alaska loophole"; if a US driver can prove to a border guard that they are travelling to Alaska for non-discretionary reasons, they will be allowed to drive through Canadian territory provided they take a direct route with no diversions, no hotel stays and minimal contact with locals. RCMP officers have fined some Alaska-bound drivers who made unauthorized stopovers in Banff National Park, but it's worth noting that there's a big difference between someone who violates the Quarantine Act to go for a hike, and someone who knowingly lies to a border agent in order to drive to Vancouver Island, a location clearly removed from any recognized route to Alaska.

An unscheduled Banff pit stop risks a $1,200 fine, but actively defrauding the Canadian Border Services Agency in order to go camping on Vancouver Island can net Americans some serious jail time. While we like to think that a visit to our enchanting corner of the world is worth any number of months in prison, it's likely dissuaded anybody considering a blatant violation of the Alaska loophole.

Statistically speaking, Americans are far from our biggest COVID-19 threat

Aside from a case here and there, Vancouver Island continues to be virtually free of COVID-19. As a result, if the disease should return it is true that new arrivals are among the most likely vectors for a resurgence.

It is also true that many of the COVID-19 strains that have affected BC have been traced to Washington State. However, most of these took root long before the onset of lockdowns; it’s believed that COVID-19 may have been spreading unchecked through Washington State as early as December, making it entirely likely that some of those early cases were also spreading into Canada.

However, when one looks at who is currently travelling to and from Vancouver Island, private cars fresh from the United States are an infinitesimal share of that traffic.

Notably, all of Vancouver Island’s direct transportation links with the United States continue to be idled due to lack of business, including the Anacortes ferry, the MV Coho, the Victoria Clipper, direct flights via Harbour Air and YYJ, and the hundreds of American-laden cruise ships that can typically be seen docked at Ogden Point over the summer.

Meanwhile, BC Ferries travel is gradually returning to normal levels. The mainland has not entirely stamped out COVID-19, so any BC Ferries rider could technically be carrying infectious disease to the Island. BC also has no mandatory self-isolation protocols regarding interprovincial travel, meaning that any of these cars could be returning freely from areas of Central Canada that have ranked among the most hard-hit in North America.

So yes, it’s possible that Americans are entering Vancouver Island under false or legitimate pretences and then violating the law by refusing to undergo their mandatory 14-day quarantine. However, when ranked among factors likely to unravel our COVID-19 efforts, this is quite a small risk.

This is something that provincial health officer Bonnie Henry has addressed directly. Earlier this month, she reassured British Columbians that “the majority of people with US license plates who are in BC are Canadians who have returned home over the period of the last few months," and that violators of the "Alaska loophole" were "very small in number."

Why BC Fared So Well Through COVID-19

The Border’s Closed So Do Your Touristing Here: The Capital’s Guide to Vancouver Island’s Hidden Gems