English photographer Lee Haywood holds the hand of his dying grandmother in this 2010 photo (Flickr.com/LeeHaywood)
Science 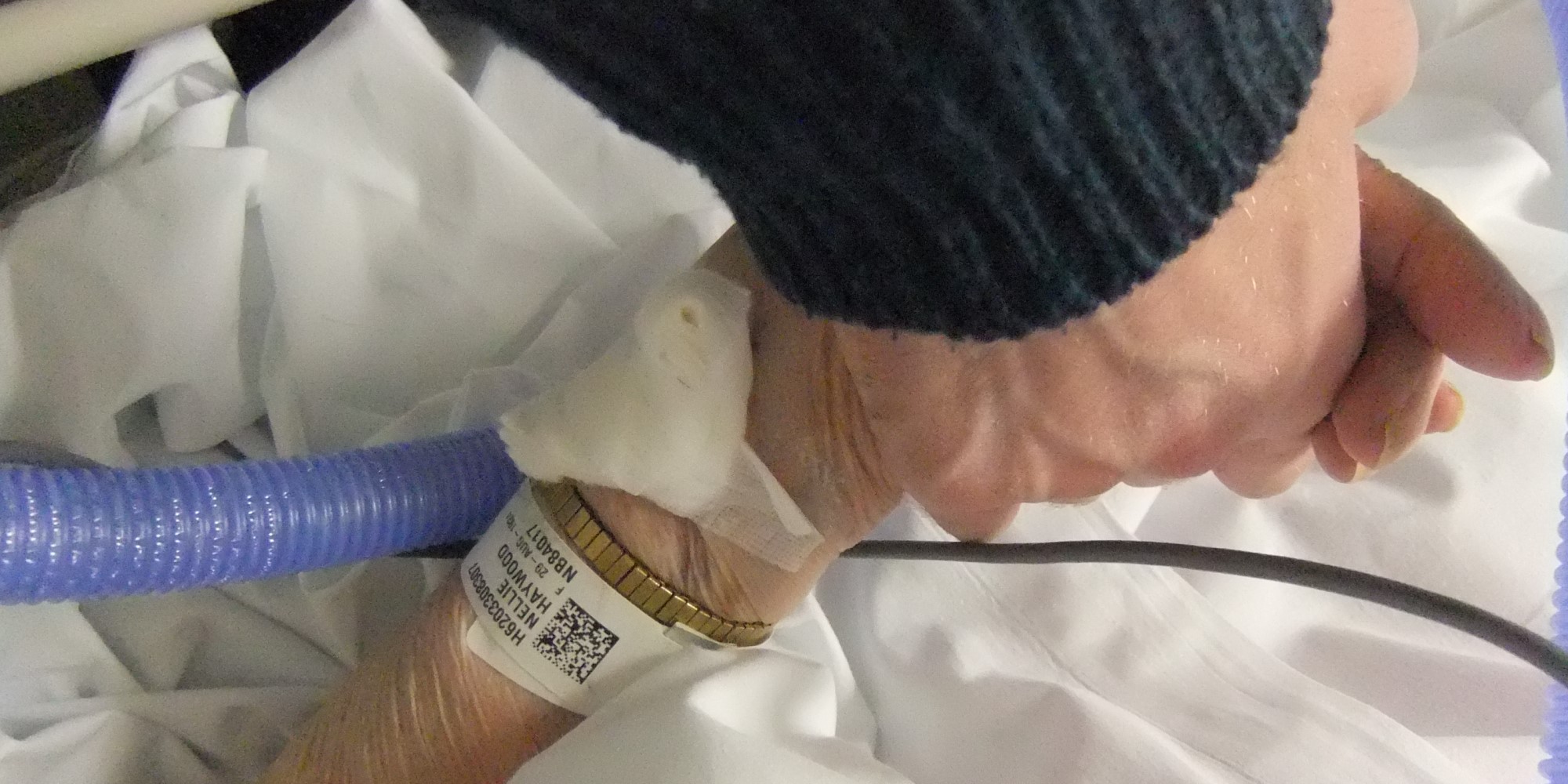 English photographer Lee Haywood holds the hand of his dying grandmother in this 2010 photo (Flickr.com/LeeHaywood)

An innovative study into the final moments of BC hospice patients has shown that, even when a dying person has lost all ability to move or communicate, they may still be able to hear and understand their surroundings.

The revelation “lends some credence to the advice that loved ones should keep talking to a dying relative as long as possible,” concludes the study, just published in Nature by Victoria-raised UBC researcher Elizabeth Blundon.

Conducted over two years at a Vancouver-area hospice, the study involved monitoring the brain activity of terminally ill patients in their final days.

Participants, most of whom were dying of cancer, were fitted with an EEG cap; essentially a bathing cap wired with electrodes that record the electrical signals emitted by a human brain.  They were then played a series of tone patterns and asked to listen for any tones that sounded out of place.

The sound test was performed twice; once when the patients first entered hospice and were still relatively conscious, and again when they had reached a state researchers referred to as “actively dying.” This latter state was defined as “the hours to days preceding imminent death during which time the patient’s physiologic functions wane.”

On the first test, participants were asked to click a mouse whenever they heard an out-of-place tone pattern. On the second test, the now-unresponsive patient was simply asked to concentrate on the task as much as was possible.

When the dying patient’s EEG data was compared both against their first test and the tests of a healthy control group, they appeared to show a brain that was still functioning and able to concentrate.

For years, it’s been a rule of thumb among healthcare circles that a dying patient will still retain the ability to hear and understand their surroundings even after all other senses have shut down. “Never assume the person is unable to hear you,” advises the British organization Dying Matters. “Talk as if they can hear you, even if they appear to be unconscious or restless.”

But thus far, some of the only evidence to this has come from patients who have undergone near-death experiences, usually after a cardiac arrest. While most people who are brought back from the brink of death retain no memories of it, about 10% report having been aware of their surroundings during the experience, up to and including hearing their own pronouncement of death.

Participants for the UBC study all gave explicit written consent to be tested even after they had lost all motor control. Although in one case, a family pulled their consent for the study after their family member had entered the “actively dying” state. In addition, sometimes patients died before the final test could be administered or, more happily, they got better.

In all, these limitations meant that only four patients were able to successfully undergo tests in both a responsive and an unresponsive state. With such a small sample size, it’s by no means a definitive conclusion that humans retain full consciousness in their final moments, but the study provides some of the most compelling evidence yet of a twilight period between unresponsiveness and death in which the brain continues to function.

The study adds to a growing body of evidence showing that unresponsive patients retain way more conscious brain activity than was previously suspected. In recent years, studies have discovered that patients in a “vegetative” (now known as an “unresponsive wakefulness”) state may in fact retain full consciousness and awareness of their surroundings.

As the UBC study concludes, “either when severely damaged or even when near death, some brains can evidence functioning in some systems.”

The Most Expensive Event In History: How the Death and Devastation of COVID-19 Ranks Against Prior Global Disasters

The Avoidable Tragedy: How Canadian Public Health Failed to Curb the Carnage of COVID-19