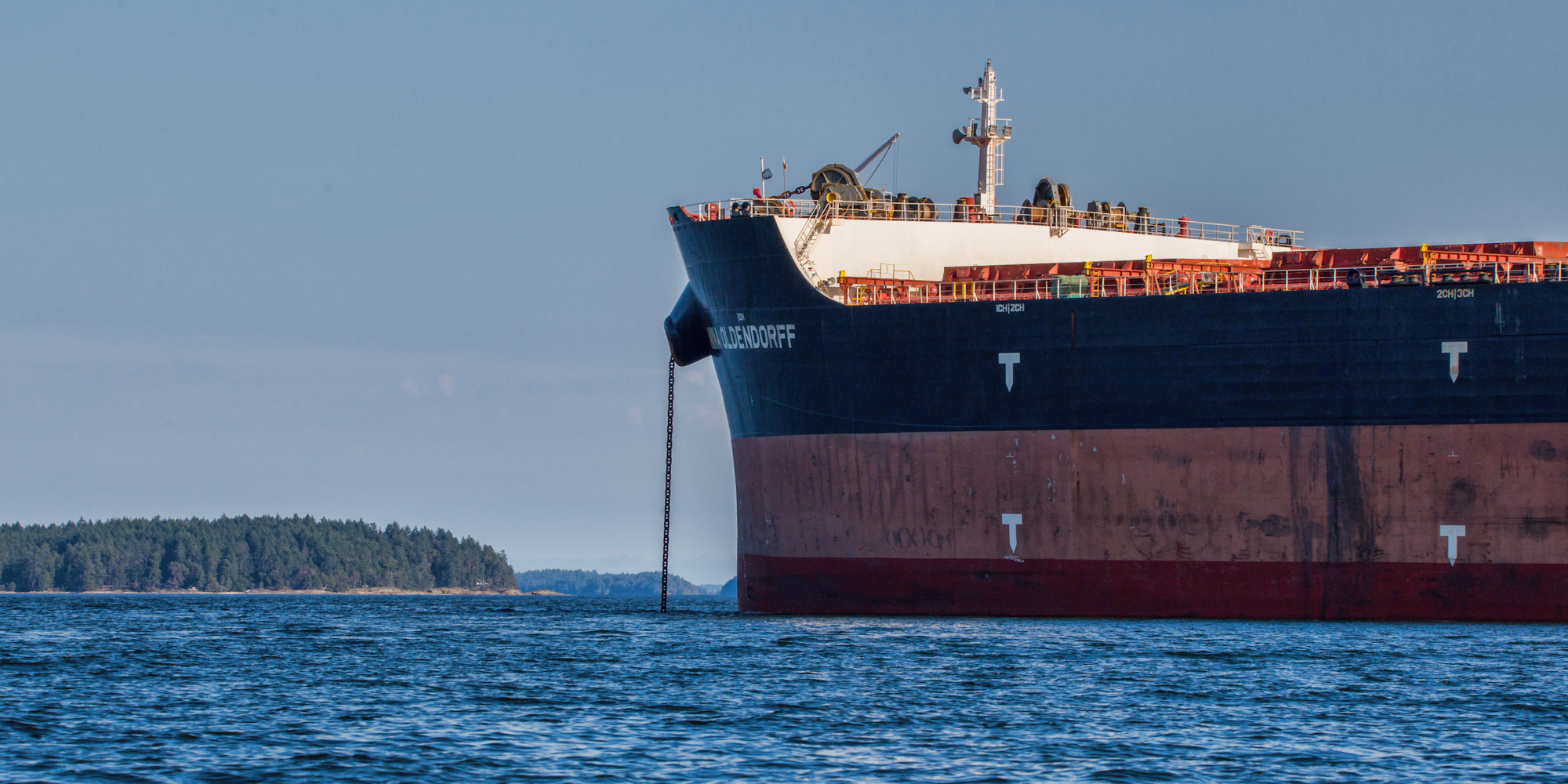 Canada-wide rail blockades to protest the construction of the Coastal GasLink pipeline have resulted in a near-unprecedented number of backed-up cargo vessels anchored off the Vancouver Island coast.

As of Friday morning, the inlets and passages of Southern Vancouver Island counted 28 moored cargo vessels, according to the ship tracking website MarineTraffic.com. The highest single concentration was a row of six ships lining the coast between Chemainus and Ladysmith.

“The blockades on the railways have really affected the delivery of export products to the coast,” said Bonnie Gee, vice president of the Vancouver-based Chamber of Shipping.

All of the backed-up vessels are bulk freighters, meaning that they’re empty vessels primarily from Asia waiting to load Canadian export products such as wheat, potash and coal. The Port of Vancouver has 19 terminals to service bulk freighters, and ships waiting in line for a spot are typically directed to one of 33 anchorages around the Vancouver shoreline, most famously in English Bay.

When those spots fill up, the passages sheltered by the Gulf Islands function as a kind of “overflow parking.”

For years, Gulf Island residents have noticed an uptick in backed-up freighters crowding their waters, but the events of the past few weeks have driven that number into overdrive.

“It’s really just made a bad situation worse,” said Chris Straw with the group Gabriolans Against Freighter Anchorages. “We were already seeing much higher than normal levels before the first protests even took place.”

Starting in early February, CN and CP rail lines primarily in Ontario and Quebec have been hit by blockades protesting the construction of the Coastal GasLink pipeline through the traditional territory of the Wet'suwet'en First Nation in British Columbia’s central interior. Although the pipeline has been approved by the nation’s elected band council, it is opposed by a faction of hereditary chiefs.

Even under optimum rail conditions, there are typically between 10 and 15 freighters waiting in Vancouver Island waters at any one time. By mid January, the queue of freighters had cracked 20 due to a number of wintertime rail disruptions including landslides and a late grain harvest. In just the last two weeks, blockades have pushed the number of waiting vessels to 30, virtually maxxing out the number of spots off Southern Vancouver Island where a large freighter can safely be anchored.

“They have turned a few vessels away, and have told them that there’s no anchorages available,” said Gee, adding that others have been advised to slow down their passages across the Pacific Ocean to allow more time for spaces to open up.

Although Gee said the current backup is among the highest they’ve seen, it’s hard to know for sure as Vancouver Island freighter anchorages are not monitored. While the Port of Vancouver keeps relatively close tabs on moored vessels within Vancouver waters, those across the Salish Sea are pretty much left to their own devices.

As the port writes on its website, “waterways beyond a port are a federal responsibility so the port authority does not normally have direct influence when it comes to managing ships that may be anchored in those areas.”

Straw’s group opposes the use of Gulf Island passages for what they refer to as a “freighter parking lot.” Waiting freighters can be moored for upwards of a month within only a few hundred meters of shore, bringing with them bright lights, 24-hour noise and a steady stream of diesel emissions. “It’s like having a factory right next door,” said Straw.

Like any moored vessel, the freighters are also at constant drift pivoting around their anchor. This results in tonnes of anchor chain being constantly dragged along the ocean bottom.  “That whole time, the chain is just mowing down the seabed,” said Straw.

Since 2018, Transport Canada has imposed interim measures to try and curb the impact of moored vessels on communities around Southern Vancouver Island. This has included monitoring moored vessels for pollution and asked particularly disruptive ships to reduce their noise, but the jurisdiction of authorities only goes so far. “Unless a vessel is violating a Canadian law, Transport Canada does not have the authority to compel a ship to move,” writes the agency in a recent progress report.

For Straw’s group, the solution lies in part with streamlining operations at the port to reduce the overall number of waiting ships. As he noted, import traffic at the Port of Vancouver is handled with such relative efficiency that container ships are almost never spotted dropping anchor in the Gulf Islands.

Meanwhile, with rail blockades clearing – including the police removal of a major blockade near Belleville, Ont. earlier this week – the Port of Vancouver may have passed the worst of the backup.

“As long as there’s no major disruptions in the next little while we should be okay,” said Gee.

How Many of These Blockades Are Actually Legal?