The tent encampment at Topaz Park (Anna J. James for The Capital).
COVID-19 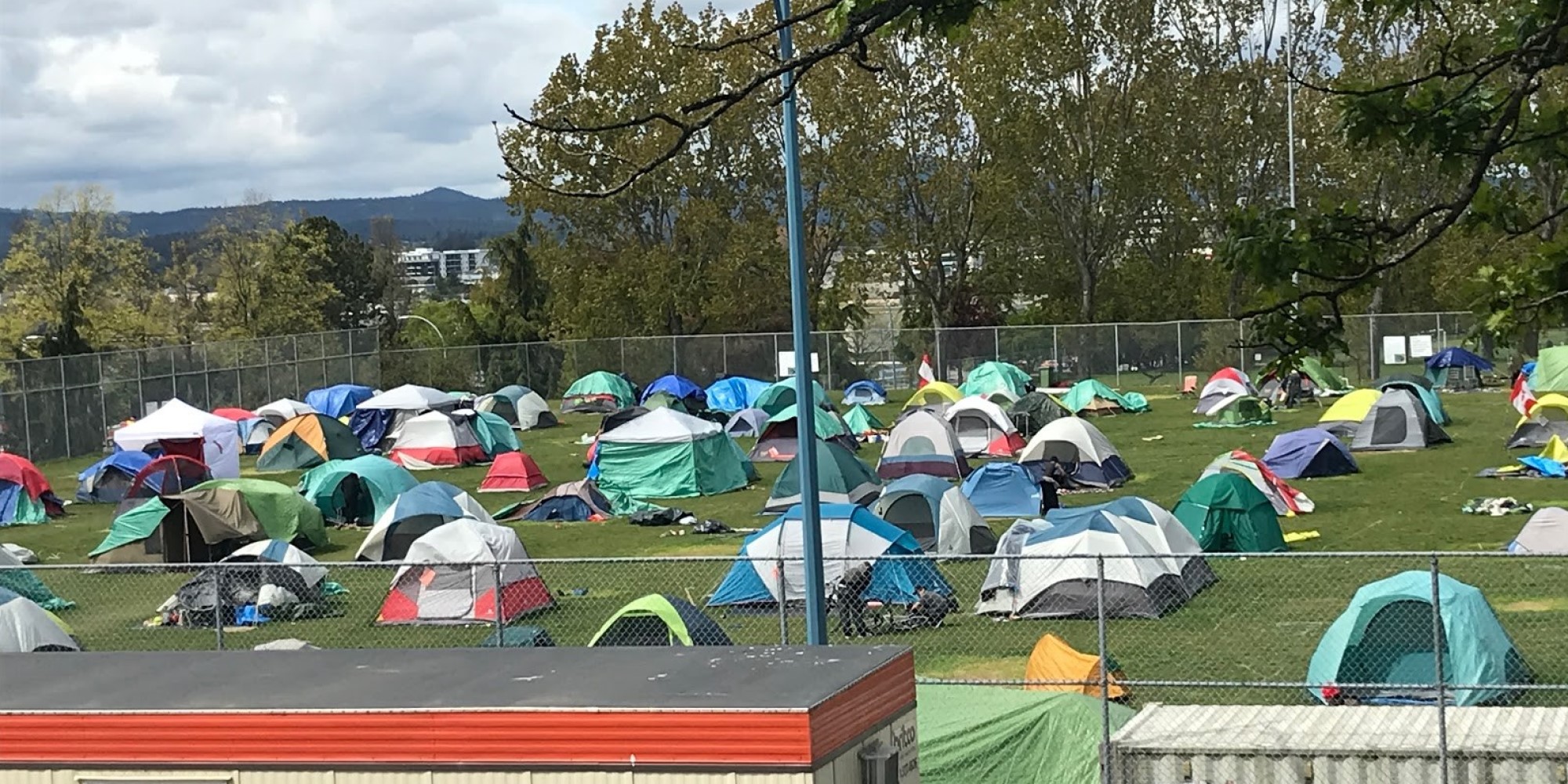 The tent encampment at Topaz Park (Anna J. James for The Capital).

It was only a month ago that the City of Victoria spearheaded a plan, together with the city’s usual homeless nonprofits and agencies, to shield the city’s homeless population from COVID-19 with a temporary tent site in Topaz Park.

In addition to shelter, the site was to provide food, emergency medical care, clothing, outreach support, washing facilities and Naloxone kits: For people who could not socially distance, this was to be their safe haven through the pandemic.

Instead, the plan yielded massive spikes in crime and a death rate that came to rival the very disease it was designed to prevent. Now, the Province of BC is stepping in to dismantle the operation.

Initially, the tent project was met with some favourable community support. In the first week of April, a 20-foot container filled with donations from the public (sleeping bags, tents, clothing, and the like) was delivered to the site.

However, public backlash began to mount, vocalized on the Twitter account @TopazTentCity that promotes opposition to the site, such as a post from Tim Richter, the CEO of the Canadian Alliance to End Homelessness, that stated: “This is such a bad idea. Unsafe, expensive, and ineffective.” The feed also retweeted a post by Sikh Youth of Victoria, who regularly serve meals at Our Place Society.

In a matter of days, crime had increased by up to 126%  around Topaz Park and its borders including open air drug use, harassment of the public, theft, vandalism, and assault. Rabbi Meir Kaplan from the Chabad Jewish Centre told CTV  his community felt “terrorized” by their new neighbours.

Former Our Place Society CEO, Don Evans, who spearheaded the project, told the Victoria News that  the Topaz site was an emergency response to the pandemic albeit a temporary and hastily assembled measure.

From a health perspective, local medical professionals believe the project, and other proposed temporary tent sites such as Royal Athletic Park (a plan that was quickly nixed by Island Health), should never have started in the first place.

“It is improper, unprofessional and very dangerous to even consider such an idea,” said Dr. Anna Sylwestrowicz, a former anesthesiologist at Royal Jubilee Hospital.

“Condensing people who struggle with mental health, addictions, and coexisting diseases of poverty and poor nutrition is a fertile breeding ground for a local pandemic. We had a large increase in hospital visits and hospitalization of these vulnerable people when we allowed tent city by the courthouse and YMCA. Crowding vulnerable people will be a potential wildfire of COVID-19 and endangers everyone from social services, police, to health care workers.”

Sylwestrowicz suggests that all housing measures should follow the nation-wide mandate of social distancing. “It is imperative that we do everything to avoid mass concentrations of people which would allow this virus to flourish and infect our community.”

It’s an argument that Mayor Lisa Helps would echo on April 20, saying in her daily update “it is not a good situation to have more than 200 people with very high health needs and mental health needs … concentrated in one place.”

Two people are confirmed to have died at Topaz, although that number may be higher as several have been reported missing. One outreach worker said those deaths were due to overdoses and not COVID-19 -related but stipulated that as both were discovered in their tents, they were obscured from the medic's view. As of publication time, the total Vancouver Island fatalities for COVID-19 stood at 4.

A Cool Aid outreach worker (who asked to not be identified) witnessed the chaos at Topaz firsthand. “They can longer boot or bottle,” she said, referencing collecting and depositing bottles for cash (bottle) and stealing from stores (booting). “All of their sources of income to feed their habits are cut off. I’m worried how this will look in even a week when they leave and head downtown and—this is just my opinion—we could see a rise in looting and break and enters. Scary stuff.”

Another outreach worker said “this situation will likely get worse before it gets better.”

“There are less opiates on the available street, so people crossing over to meth,” he said. “Drug prices are up. Dealers are no longer cuffing [allowing buyers to run a tab], they’re diluting their batches with Fentanyl.”

With the Province of BC now setting up hotel accommodations for Topaz residents, the scheduled move out date is May 9, although the worker stipulates there is an extension—May 13.

At its inception, Topaz’s intended capacity was 100 tents. One week after the closure announcement, roughly 70 tents remain, not including countless others erected outside of the allocated premimiters, cascading deep into the brush.

“There’s a lot of people who don’t want to go,” said the worker, “a hard closure is near impossible. Nobody knows what to do.”