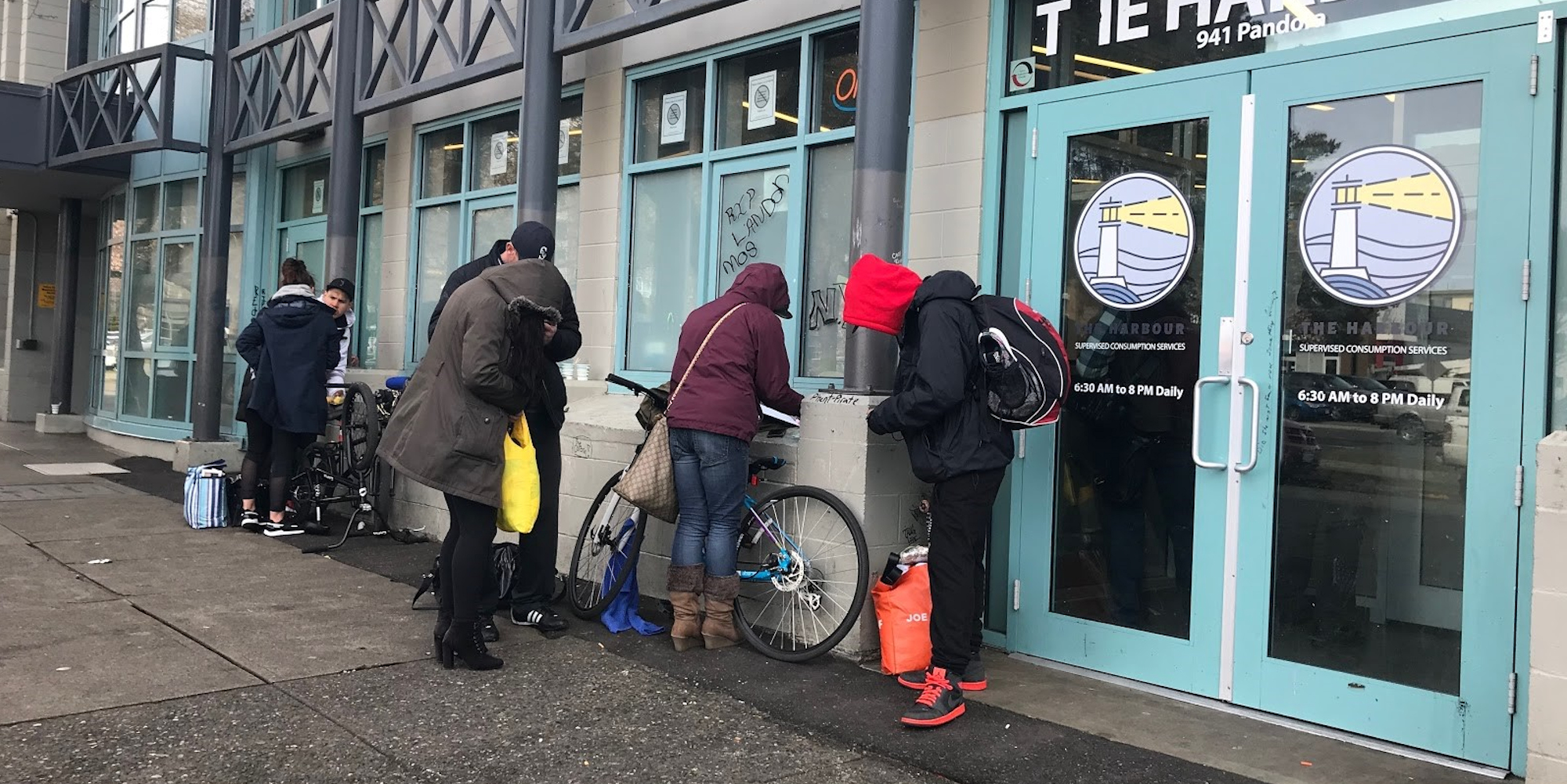 The exterior of The Harbour, a Pandora Street supervised consumption site (Anna J. James for The Capital).

As COVID-19 prepares to bear down on BC, Victoria’s already overstretched homeless services are being forced to improvise how to keep the virus from spreading among a population for whom self-isolation is nearly impossible.

“We can only do our best, but social isolation when people don't have anywhere to go is near impossible,” said Grant McKenzie, director of communications for Our Place Society, a community centre that serves around 1,600 meals a day in Downtown Victoria.

In a statement released Tuesday, Our Place Society said it will shutter its drop-in area but will “continue operating its washroom facilities, transitional housing, shelter spaces, and providing three meals per day.”

“We're still at the early stages of the pandemic, but we are certainly expecting there to be a large number of hurting people in the area,” said McKenzie. “Financial donations are needed more than ever during this time.”

He added, “it’s heartbreaking for us to limit access to so many vulnerable people, but it's the only way we can meet the province's new pandemic regulations.”

Cool Aid Society, the operators of another drop-in centre on Pandora Street, has also shut down their community centre in accordance with the City of Victoria and public health directive to limit social gatherings. Like Our Place, Cool Aid will continue to operate its housing and emergency shelter facilities.

“We are struggling to keep up as decisions are being made in real time,” said Fred Cameron, the operations manager at SOLID, a face-to-face outreach service where current and ex-addicts connect with those on the street. “Today we just completed a first aid course that included residents of the Tally Ho and the Johnson Street Community.”

Cameron said they will continue to operate as usual but with heightened awareness. “We continue to employ people from the street community to do street outreach, handing out harm reduction supplies (such as clean needles) and help keep the downtown core safe.”

It's how we respond to this pandemic that matters--sooo grateful for a $50K donation to bolster the emerg preparations @ourplacesociety
from a caring couple, marooned now in the UK, and for the calls and cheques that came in over the weekend. #YYJcares #inspiringleadership

Homeless populations are poised to be particularly hard hit by COVID-19. Living in close quarters in a shelter and performing activities such as “picking” for cans and bottles necessarily opens people up to viral infection. Even before COVID-19, it’s for these reasons that North American homeless populations were being hammered by outbreaks of Hepatitis A.

Worst of all, COVID-19 strikes hardest against patients who are already managing pre-existing health conditions, which are endemic among North American homeless communities.

“People experiencing homelessness aged younger than 65 years have all-cause mortality that is 5–10 times higher than that of the general population. COVID-19 infection might further increase this mortality disparity,” reads a recent summary published in The Lancet. The same paper also noted that many of the efforts being justifiably taken to limit the spread of the virus, such as the closure of public spaces, has an outsized impact on the homeless. “In lockdowns, public spaces are closed, movement outside homes are restricted, and major roads of transport might be closed, all of which might negatively affect people experiencing homelessness,” it read.

The last time a major coronavirus pandemic struck North America was 2003, when SARS hit Toronto. In the wake of the outbreak, Toronto health authorities explicitly warned cities to include homeless populations in their pandemic planning, particularly in figuring out measures to isolate infected individuals and in preparing for “possible homeless shelter closures due to staff shortages or high attack rates among clients.”

On Thursday, North America recorded its first case of a homeless person dying of COVID-19. The individual, whose name, age and other health conditions have not been released, died just outside San Francisco.

Gov. @GavinNewsom just shared that the most recent California #COVID19 fatality was a homeless man in Santa Clara County. It’s the first coronavirus case we’ve heard about among the unhoused population, but likely will not be the last.

In 2018, there were 931 people recorded as being homeless in Greater Victoria, however, this statistic is from voluntary participation in the annual Point-In-Time Count and may be higher. The term “homeless” includes those sleeping rough,  but also those who are “provisionally sheltered” or  “at-risk” (who have shelter that is precarious or dangerous).

Since closing their doors after lunchtime on Tuesday, groups of people in need remained pooled around the entry of Our Place. According to an Our Place employee, Victoria Police will only intervene on Pandora in instances of violence, thereby abandoning their regular procedure of asking loitering people to move on.

Looking down Pandora Street where almost 100 people stood on the pathway, the worker warned, “this is the start of a new tent city.”

What COVID-19 Will Do To Real Estate