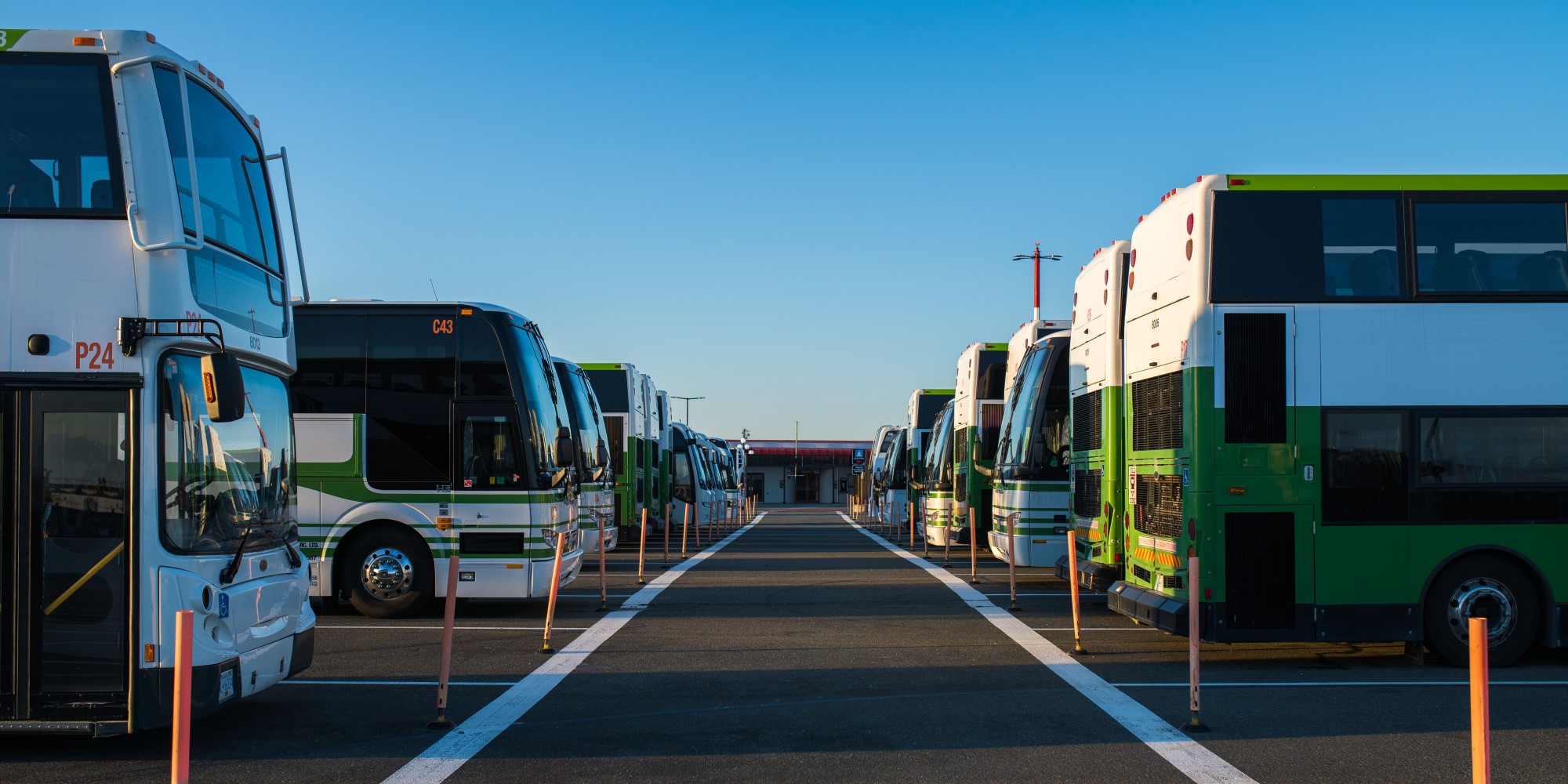 Buses that would typically be used to move cruise ship passengers, now idled for the season at Ogden Point (James MacDonald for The Capital).

Since the onset of COVID-19 lockdowns, ridership on major BC Ferries routes has plunged by more than 90%. By the first weeks of April, BC Transit usage had dropped by more than three quarters. In the Inner Harbour, boat and seaplane traffic has plunged so precipitously that the water is clearer than it’s been in generations. And instead of having the busiest cruise ship season in its history, Victoria is having no cruise ship season.

We all know that few of us are leaving the house these days, but below, we meticulously dug up the data for boats, cars, bikes and airplanes to tally up just how thorough BC and Vancouver Island’s lockdown has been.

With the exception of Ogden Point, the transportation hub most feeling the effects of COVID-19 is the airport. The April passenger numbers at YYJ are a mere 2.6% of what they were in 2019. While the airport would typically be in the midst of busy season, right now it’s only servicing a handful of small, mostly empty Western Canadian commuter flights. To find an era when fewer people were boarding aircraft in Greater Victoria than they are now, you’d probably have to venture back to the 1930s.
‍

Your Android phone, just like millions of others around the world, knows and remembers where it is at all times. This is mainly to help Google target ads at you, but in a crisis it is also an incredibly valuable well of information on where and how people are moving. Using months of accumulated information, the search engine giant was able to get a general sense of how much time people normally spend at parks, the grocery store or their jobs. Then, they’re able to look at realtime data of where there phones are turning up, and compare that to the average. The above chart is basically a visualization of BC’s COVID-19 experience: You’ve got the mid-March shopping rush, the initial reluctance to go to parks and of course a dramatic reduction in time spent at the mall, at the office or at the gym.

It’s not just Greater Victoria’s highways that are particularly free of traffic these days. Although cycling is one of the only remaining forms of exercise in a world stripped of sports, gyms and rec centres, bike usage has dropped on all Victoria’s bike paths and bike lanes for the simple reason that very few people are commuting anymore. This is reflected in the daily traffic patterns. Under normal circumstances, almost all of Victoria’s cyclist is crammed into 60 minute windows around 9 am and 5 pm. Now, the peak time of day for cycling is just after 5 pm when much of the city apparently decides to burn off steam from the home office by going for a ride.
‍

Every time a commercial ship pulls into a BC port, they hire a marine pilot to show them the way. The above stats are taken from the Pacific Pilotage Authority, and show the number of times that their members have been called upon to serve one of the indicated vessels. While Canada’s transportation networks are largely functioning just fine under pandemic conditions, it’s notable that the rate of arriving car carriers has dropped in half, possibly due to Asian industrial shutdowns as a result of the pandemic. Given the time frame, these numbers may also be down as a result of the weeks of rail blockades that dominated the Canadian news cycle before the full-blown arrival of COVID-19.
‍

Ferry traffic numbers have garnered a special kind of worry among Vancouver Islanders hoping to maintain the Salish Sea as a public health moat between themselves and BC’s COVID-19 epicenter in Greater Vancouver. This chart only show the first two weeks of pandemic conditions in late March, but it shows that by April 1st ferry traffic had already ebbed below anything seen in at least the last five years.
‍

Vancouver Island’s other major ferry link to the mainland was also in a full-blown ridership tailspin by late March. Just as with the Swartz Bay routes, it’s notable that passenger numbers dropped much more sharply than vehicle numbers. While it’s still eminently possible to socially distance on a BC Ferries vessel while staying in one’s car, it’s quite a different story when walking on.

Here's Just How Much BC Has Been Drinking Through the Pandemic

As Victoria’s Tent Cities are Dismantled, A New Neighbourhood Braces for the Consequences