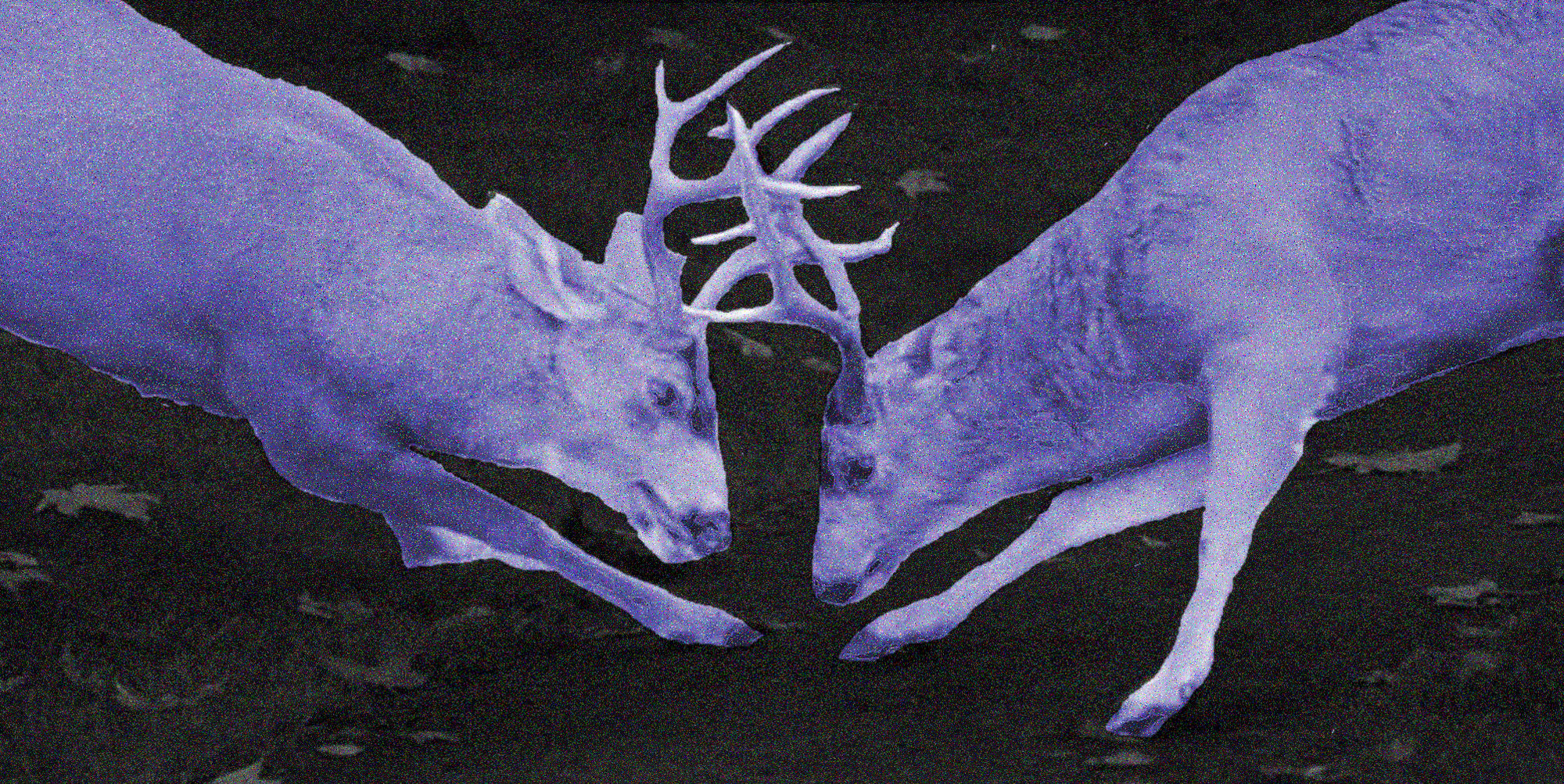 Two bucks square off in a Saanich front yard in 2012.

Jan Picard lay huddled at the base of her 10-foot-tall deer fence, trapped, bruised and watching as her carefully tended Oak Bay garden was destroyed around her.

Her attackers — three bucks and a worried-looking doe — pinned her against the fence and kicked her with their hooves as she tried to reopen the gate that had swung closed. Once they were done with her, they circled her basketball-court-sized enclosed garden, alternately looking for a way out and feasting on the lush end-of-summer harvest.

“They kind of knocked me over, that’s when I bundled down,” said Picard. “And they kept on me. Like I had pummel bruises on my back… I believe they were challenging me for my garden. Not even five minutes and they were destroying the place.”

This wasn’t the first time deer had kicked open the gate to her garden, but it was the first time Picard had found herself trapped inside along with them.

The September, 2018 standoff eventually ended when Picard was able to gingerly crawl to the gate and swing it open, freeing herself and the deer from the confines of the fence.

Reflecting back on the situation a year later, she says she isn’t so much mad as she is angry. “We wouldn’t allow dogs to run wild like that,” Picard said. “It just comes down to the anthropomorphic, misplaced ethos of the pro-deer people.”

The deer in oak bay are becoming less fearful. This one startled me and the dog on a warm winter walk. #yyj #oakbay pic.twitter.com/2lqXHfDVXS

Vancouver has rats, Edmonton has magpies and Toronto has raccoons. But in recent years, Victoria has been swamped by a sudden and unexplained influx of black tailed deer. With injuries and deaths racking up on both sides, B.C.’s capital is at a crossroads of whether to fight the deer, or to make an attempt at peaceful coexistence.

Black tailed deer are native to what is now Vancouver Island, and have roamed the area for thousands of years. Nevertheless, through much of Victoria’s modern history the animals kept to the city’s outskirts, rarely straying into the urban fabric. It’s only in the last few years that it has become not uncommon that a Victorian going about their business will suddenly find themselves plunged into a standoff with an irate full-antlered ungulate weighing as much as 200 pounds.

Late last year, an Oak Bay woman received a concussion and a fractured arm after she was charged by a deer while riding her bike. In November, two boys reported being on their scooters when a “large deer with antlers” chased them down the street. In June, a woman and her dog were chased around a parking lot by a deer, escaping only when an SUV came to their rescue by putting itself between them.

The deer have even killed people. In 2002, the lifeless body of Oak Bay municipal employee Frank Smilowski was found alongside Greater Victoria’s Lochside Trail. He had been struck and killed by a deer as he cycled to work.

“It doesn’t take very many times where you have a buck or doe that is aggressively chasing after you where you don’t have sympathy for them anymore,” said Oak Bay mayor Kevin Murdoch. “I even know of a few near misses of deer jumping over (backyard) fences with kids in there.”

Oak Bay’s chief of police would probably agree, having been hospitalized by a deer only two years ago. Chief Andy Brinton was on a Saltspring Island cycling trip in 2017 when he was struck by a deer diving from some bushes, resulting in a broken clavicle and several broken ribs.

Currently, there are somewhere between 72 to 128 black tailed deer in Oak Bay, and in Esquimalt, the estimate is approximately 100. But until 2017, no municipality in the Capital Region kept exact numbers on the deer within their boundaries, so it’s unclear when Victoria’s deer started to become a problem. According to anecdotal evidence, the ungulates started to make their presence known approximately 10 years ago.

“I remember seeing one about 20 years ago and being in shock,” Murdoch said. “Then I saw nothing again for seven or eight years.”

Oak Bay Public Works scarcely encountered a dead deer as recently as 2006. In 2018, they cleaned up 55 deer carcasses. Region-wide traffic statistics show that vehicle-deer collisions rose from 35 in 2000 to more than 100 in 2010.

Nobody is entirely sure why urban deer numbers have spiked so dramatically in recent years, but the influx of deer has coincided with a building boom on Victoria’s fringes. Hectares of forest have been felled to make way for new developments in Langford and Sooke, and one theory is that displaced deer have simply decided to make a new life in the city.

Anita Schaufelbuhl, a Victoria resident for over a decade, is conflicted about the urban deer. A prolific gardener, she is always a little bit worried about her plants and flowers. But so far, whether it’s because of her dogs or her home’s location, she had never even seen a deer in her neighbourhood before this year.

“As a gardener, I definitely don’t want deer eating my plants, but on the other hand, I feel like this didn’t used to be an urban setting, this used to be farmland and forests where deer lived,” she said.

In much of Canada, the solution to an overabundance of deer is simple: You shoot them. Just two years ago, Parks Canada and the Haida Nation dealt with their own black tailed deer problem by hiring marksmen to completely wipe them out.  But while Victorians may hate their deer, killing them has been a whole other matter.

In 2015, Oak Bay received permission from the province to carry out a cull, killing a total of 11 deer over a period of two weeks. The culled deer were not wasted; instead, the meat and culturally significant parts of the carcasses were given to local First Nations groups.

Despite this, it sparked an overwhelming backlash, including a wave of letters from around the world. “People even flew out here from Ontario and other places to address council to ask us not to hurt the deer,” said Murdoch.

Meanwhile, there’s also plenty of compelling data to show that deer culls aren’t all that effective at eradicating urban deer.

In Helena, Montana, a program of yearly culls did prove to be an effective way of reducing deer numbers, according to a study conducted by the University of Montana. However, as the deer became wise to Helena’s traps, officials found that the effort and cost of the program increased steadily throughout the years.

“When you remove a large number of deer or other wildlife all at once, nature just fills that vacuum,” said Kristy Kilpatrick, president of the Urban Wildlife Stewardship Society (UWSS).

The UWSS was started in 2015 to campaign against Oak Bay’s cull. According to  Kilpatrick, culls don’t work in Victoria because if deer are eradicated in one municipality, more will simply enter from neighbouring areas.

“It’s not as simple as there’s too many deer, let’s get rid of some,” she said.

Instead, the UWSS has been working with the city and the province on a different solution: Birth control.

This fall, directly before rutting season, scientists and veterinarians working with UWSS will begin sedating Oak Bay does before injecting Zonastat-D, an immunocontraception vaccine. A couple weeks later, a booster shot is then administered via dart gun.  Immunocontraception has proved effective in the past at reducing populations of wild horses in Alberta, but this is the first time it has been used in B.C.

The Urban Wildlife team is out (& we've already responded to our first call about them). They wear high visibility vests & carry a rifle to dart deer with contraceptive vaccine. https://t.co/pjUe01vtbZ (I'm guessing that's easier than trying to use some of the other options).😳 pic.twitter.com/tSKnbduJWB

“I think it’s fair to say that our final goal won’t be getting rid of deer,” Oak Bay mayor Kevin Murdoch said. “It’s just maintaining the deer population at a level that seeing a deer is a rare treat as opposed to a constant companion on the streets.”

Victoria’s deer are able to exploit the fact that they live in a region with 13 distinct municipalities. “We’re kind of like a jigsaw puzzle. So if I do this process but my neighbour hasn’t … deer don’t have those boundaries, so in order for us to do this appropriately, we need to do it across the region,” said Esquimalt mayor Barb Desjardins.

In recent years, deer incidents in Esquimalt have reached a tipping point, forcing municipal officials to spend upwards of $40,000 to start cobbling together their own anti-deer strategy.

“For the most part, I just think they’re a beautiful creature,” said Desjardins. “But if I’m walking down the sidewalk and there’s a three-point buck standing on the sidewalk, or even just across the road, it makes me really nervous.”

In 2016, the provincial government announced an urban deer management program with a $100,000 pot each year. But Desjardins has argued that too much money has already been spent throughout the region to separately manage a problem that affects them all.

Oak Bay, for instance, spent some of the provincial money to fund half of their immunocontraception program. But a deer needs only to cross a municipal boundary into Saanich or Victoria to be outside the range of Oak Bay dart guns and veterinarians.

Pro-deer activists like Kilpatrick say that Victorians need to simply start adapting to life among the deer. Create deer-resistant gardens with fences, repellent sprays and plants that deer won’t eat. If you see a deer while walking your dog, cross the street.

“Clearly there are deer in the urban area now, they’re in our midst — clearly they’re not going away,” she said.

But as another fall rutting season approaches, it may not be as simple as avoiding deer for some.

“I’m looking out the window of my house onto Gonzales Hill where the observatory is … this whole mountain is just deer grazed and home to its own little local herd which gets very big,” said Jan Picard.

It’s approaching the end of summer and Picard says the grass on the hill is either grazed flat or completely brown. With dry, hot summer weather and growing fawns, food has become scarce on the hillside — but not in the green, manicured yards of the neighbourhood below.

“So they’ll all come over here and there’s fighting and rutting and charging and it’s like, lawns don’t become safe, driveways, the roads — it’s crazy,” she said.

“We maintain the (deer) for our amusement and entertainment and some misguided notion that we can cohabitate and that it was their territory first. But it’s not anymore. I’m very sorry, but we paved it and pavement is not their territory.”