Empty shelves at a Seattle-area grocery store. A COVID-19 outbreak in the Washington State city has led to residents stocking up on food and supplies (Source: Twitter.com/NatronJones)
COVID-19 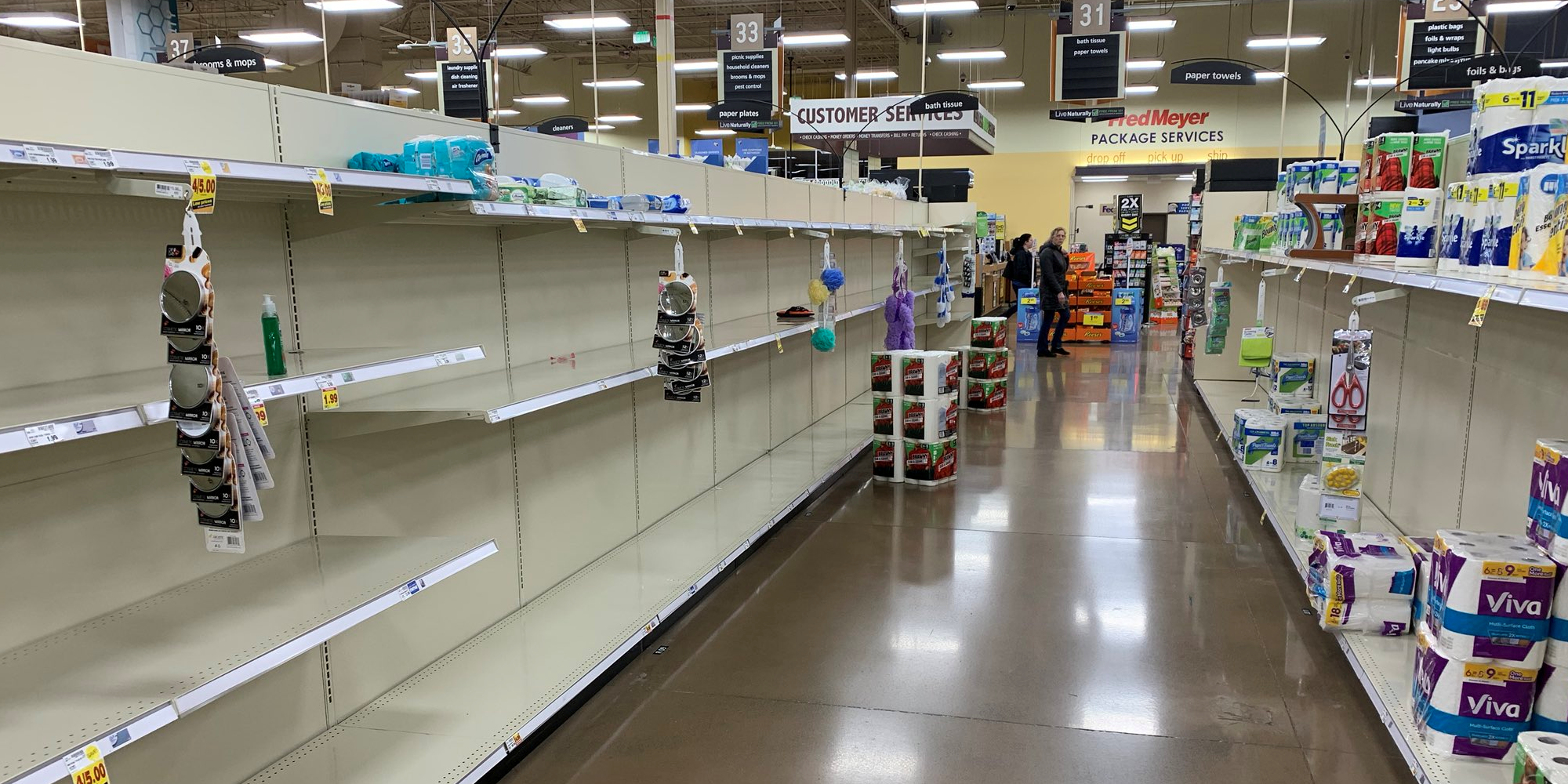 Empty shelves at a Seattle-area grocery store. A COVID-19 outbreak in the Washington State city has led to residents stocking up on food and supplies (Source: Twitter.com/NatronJones)

Just 100 kilometres from Victoria, the suburbs of Seattle have just been plunged into the precise scenario that health officials around the world are losing sleep to avoid: An unchecked deadly outbreak of COVID-19.

Nine are dead, more than 30 others are infected and most alarming of all, there is evidence that COVID-19 had been quietly spreading through the Seattle suburbs for as long as six weeks before the first case emerged was confirmed.  “The coming days and weeks are likely to bring more confirmed cases of COVID-19,” wrote the region’s King County Public Health in a Tuesday statement.

As of March 5, there have been no confirmed cases of COVID-19 on Vancouver Island, and Canadian public health authorities have been containing the disease by diligently isolating any new cases and tracing their contacts. However, all it would take is one rogue carrier of the virus to set in motion a chain of infection that could put Canada on the defensive. As Health Canada notes, “we are ready to shift our approach quickly if need be, from containment to slowing the spread of COVID-19.”

Below, The Capital has compiled a general picture of what it would like at the ground level if COVID-19 should make landfall in the Capital Region.

Schools are one of the most reliable incubators of pandemics, and always have been; they’re facilities tightly packed with people not known for their diligent hygiene, making them perfect vectors to spread the disease throughout the community.

Starting Thursday, the Seattle-area Northshore School District entered a full-scale shutdown expected to last for at least two weeks. In a statement, district superintendent Michelle Reid noted that 26 of the district’s schools had already been affected by direct or indirect exposure to the virus, and that at least 500 of their staff either had weakened immune systems or were older than age 60, both of which put them in the most high-risk demographic for COVID-19.

After a crash training course on Tuesday, the district’s teachers are now planning to continue instruction online. “We are shifting our education from the classroom with four walls to the cloud,” wrote Reid.

As Victoria’s School District 61 noted in a statement to parents, the Provincial Health Officer of British Columbia is not recommending school closures. However, this could change overnight if COVID-19 suddenly starts cropping up in British Columbians with no known connection to affected areas overseas.

Retirement homes and hospitals would be placed into lockdown

As of this week, COVID-19 has killed roughly 3,000 people; including more than 100 outside China. Of those who have died, they are disproportionately older. While there are virtually no under-30 COVID-19 fatalities, in patients that are older than 80 years old Chinese data is showing a fatality rate of roughly one in six. The epicentre of the Seattle outbreak, in fact, has been the Life Care Centre nursing home in Kirkland, Washington. As of Thursday, six deaths have been linked to the facility.

If COVID-19 ever starts spreading through Victoria, expect to see Vancouver Island’s many care homes being the first to adopt diligent control measures. This would include immediate quarantine of any residents showing symptoms, careful screening of staff and the banning of visitors.

Life Care Centre has restricted visitation, and has seen many of its usual staff fallen ill with the virus . For now, anybody with family inside the facility is being informed of the situation via hotline. “While we would like to understand how the virus entered our facility, right now our focus is on working to ensure a safe environment for our residents, families and associates,” wrote executive director Ellie Basham in a statement.

There’s a term in public health known as “surge capacity.” In short, it’s the ability to marshal extra equipment and staff in the event of an emergency. The BC Centre for Disease Control, the agency coordinating the province’s COVID-19 response, has a stockpile of protective equipment such as masks to be rolled out in the event of outbreaks. The agency has also been ramping up operations at its Vancouver-based public health laboratory to ensure timely processing of an avalanche of COVID-19 tests.

Live look at the grocery shelves in Seattle pic.twitter.com/R7aGgUZch9

On the healthcare frontlines, meanwhile, the picture is of a system that is already stretched to the limit. For each of the last five years, the BC hospital system has seen an occupancy rate higher than 100%. Were BC’s COVID-19 cases to ramp up, there are procedures to set up isolation facilities within the province’s hospitals, but these would obviously be complicated at any hospital that is already having to put patients in hallways. In Seattle, overstretched health facilities have already prompted civic authorities to buy a motel for patient isolation.

The region’s many care homes, meanwhile, have been suffering from constant understaffing woes. The care home operator Retirement Concepts couldn’t even operate its facilities under normal conditions without getting four of them taken over by Island Health over complaints of dangerously negligent practices. It’s reasonable to assume that they would been utterly blindsided by a sudden outbreak of COVID-19.

If the worst were to happen, a COVID-19 outbreak would be treated similar to an indefinite snow day

There’s a reason why Health Canada is advising Canadians to stock up on groceries. If COVID-19 takes hold in a Canadian city, the best course of action will be to keep as many people home as possible.

In the Seattle area, public health authorities aren’t enacting curfews, but they are asking residents to stay home as much as possible, including working from home, avoiding healthcare facilities and staying away from public places if they’re in a high-risk demographic.

In Italy, which just saw COVID-19 deaths top 100 this week, all schools and universities are now closed, and authorities have imposed sharp restrictions on public gatherings, including the playing of soccer matches without live spectators.

The effect of similar measures on Victoria would be akin to the region’s experience with its mid-January snowfall: Residents would be asked to stay at home unless absolutely necessary, and everything from city council meetings to concerts could face postponement. As anti-pipeline blockades taught us last month, a significant share of Victoria’s government workers are able to telecommute in an emergency.

As in China, the economic effects could be devastating

On Wednesday, Seattle journalist Naveed Jamali posted an image of an eerily empty Puget Sound. The waters are usually packed with Chinese-origin cargo vessels bound for the Port of Seattle. But with COVID-19 having dealt a catastrophic blow to the Chinese economy, it’s now slowing down everything from manufacturing to exports.

View from home looking at the Puget Sound. What’s missing? Cargo ships. #Seattle is one of the largest ports in the country. pic.twitter.com/BlDt3YMqt8

The timing couldn’t be worse for COVID-19 to take root in the Pacific Northwest. Victoria is only weeks away from the beginning of its summer tourist season, including a schedule of cruise ship arrivals that was expected to be the busiest in the city’s history.

Thus far, Canada has been unique among G20 countries for its hesitance to impose travel bans on areas affected by COVID-19.  But other countries haven’t been nearly as reluctant. On Wednesday, for instance, the United States announced that its border crossings would be turning away any Canadians who had travelled to Iran within the previous 14 days.

Needless to say, in any public health emergency tourism is inevitably one of the hardest-hit sectors. When SARS hit Toronto in 2003, eventually killing 44 people, early estimates pegged the economic losses at more than $1 billion, including $350 million in lost tourism revenue. If a Canadian city suddenly starts making headlines as the newest North American home of COVID-19, the most immediate result would be a wave of cancelled conferences and hotel stays.

In an extreme situation, the power of a Canadian Medical Officer of Health is virtually limitless

In late January, the Chinese government quarantined the entire 11 million-person city of Wuhan, the epicentre of the outbreak. At the time, York University professor of global health Steven Hoffman said it would be “inconceivable” for the same thing to happen in Canada. “Such a broad, unspecific quarantine measure like this would certainly violate our Canadian Charter of Rights and Freedoms because it would be a restriction on people’s rights that are not justifiable,” he told the Canadian Press.

The BC Public Health Act would disagree. In any scenario that poses “immediate and significant risk to public health,” medical officers of health are empowered to perform any number of actions that would be considered charter violations under normal circumstances.

In the midst of an outbreak, medical officers of health can “conduct an inspection at any time, with or without a warrant, including of a private dwelling.” If a COVID-19 patient refused to self-isolate, a medical health officer could order them detained by force.

Canadian public health authorities do not like exercising coercive power: The entire goal of being BC’s Provincial Health Officer is that you eventually retire without the public ever having had to learn your name. But if COVID-19 should ever begin to hit Canada with the ferocity with which it has hit China’s Hubei province, there’s no technical reason why large-scale quarantines couldn’t be in our future.

How Victoria Is Preparing for Coronavirus